The Michigan Charter Boat Association (MCBA) is a nonprofit organization organized and located in the State of Michigan. Individual members are United States Coast Guard licensed for the Great Lakes and all charter boats are state inspected. Michigan is the only state on the Great Lakes that require inspections of their charter boats. Our member Captains are dedicated to establishing a professional charter industry in the State of Michigan.

Contribute to the Legal Fund

Since 1985, the arrangement between the Tribes, the State of Michigan and the federal government to share the fisheries of the Great Lakes has been contained in two agreements that were negotiated by the parties and then put in place by the Federal Court in West Michigan as a “Consent Decree.” The first decree was implemented in 1985. It had a 15-year term. In 2000, a second decree was put in place by the court. It had a 20-year term. It expired last year but has been extended by the court while the parties negotiate a new agreement. A critical issue to the past two agreements, and one that will be critical to a new agreement, is the division of the Great Lakes fishery between the Tribes and those fishers who are licensed by the State of Michigan. The 1985 agreement allocated the Great Lakes fishery among the parties by lake, zones, species and catch limits. It was premised on a roughly 50-50 allocation of the fishery between the State of Michigan and the Tribes. The Tribes were principally allocated whitefish stocks and the State of Michigan was principally allocated salmon stocks. Lake trout stocks were shared with the allocation to each party differing based on the area of the Great Lakes at issue. Generally, the Tribes were allocated more lake trout in areas where they were pursuing whitefish and state-licensed fishers were allocated more in traditional sportfishing areas. Overall, however, the fishery resources were generally shared equally. Further, the zones created for state- and Tribally-licensed fishers reduced gear conflict between commercial nets, particularly gill nets and traditional sport fishing gear.

Contact any Board Member or Port Captain with area issues. 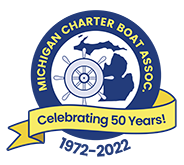 Why not join MCBA?

The Michigan Charter Boat Association represents over 600 professional captains that serve over 100 ports in Michigan. As one of Michigan's largest recreational organizations, member captains operate fishing charters on the Great Lakes, River Guides on Michigan's thousands of miles of steams and rivers, Sail boat charters out of many Michigan ports of call, Scuba Dive charters in Michigan's shipwreck dive preserves, and scenic cruises exploring the beauty of Michigan's shoreline, lighthouses, or a lake vacation adventure. These businesses contribute to Michigan's tourism economy and are vital to the region. Michigan Charter Boat Association Captains and their vessels meet all state and federal laws.